German web development: a website to boost your exports to Germany

You are here: Home » Multilingual website design » German web development: a website to boost your exports to Germany

On the web, German is still one of the most widely used language with 75 M users in 2010. Germany is Europe’s most industrialized and populous country. To boost your exports to Germany, you will need the right online marketing tools in German language. The Openvalley agency is specialized in developing multilingual websites to target the German speaking countries.

The German economy – the fifth largest economy in the world in PPP terms and Europe’s largest – is a leading exporter of machinery, vehicles, chemicals, and household equipment and benefits from a highly skilled labor force.
Domestic demand in 2013 is becoming more a significant driver of Germany’s economic expansion, although growth had been fueled by exports so far. In 2013, Germany is still one of the more dynamic economies of the Eurozone.
Most of German-speaking online users perform searches in their native language, so in order to compete in this growing market, your company definitely needs a web in German.

– There are 75 M internet users speaking German in 2010 according to internetworldstats.com . It is the 2nd largest internet market in Europe.

– With the German language, you can reach not only Germany but also Austria, and part of Switzerland, Luxembourg and Liechtenstein. You can also find German speakers in parts of Belgium, Eastern France and Northern Italy.
– To get a good rank in German search engines such as Google.de, and to be found by your target customers in Germany, you will have to optimize your website in German. 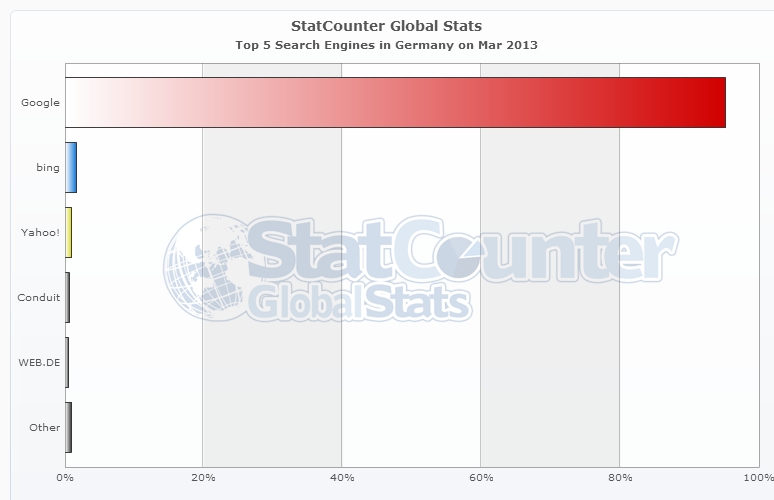 Facebook is the most popular social network with 25 M users (Social Bakers, march 2013), surpassing local incumbents StudiVZ sites and Wer-Kennt-Wen.de, and other networks such as Xing.

Which digital services to enter the German market?

2Social media in Germany
Social media should be used to connect with your prospective customers in Germany, which will drive more business. Openvalley assists you in defining the right social media strategy, so as to increase your presence on social networks.
++ info

3Content marketing for a German speaking audience
As cliché as it may sound, content is one of the most important factors in any search marketing strategy. It is highly important to ensure that you have content worth viewing in German to connect with a German-speaking audience.

4Website translation
The issue of localization and translation of content in German is key to connect your customers abroad. Openvalley works with a team of native speakers to ensure web translation and localization is SEO optimized which, will positively affects your website rankings.
++ info

5Website design in Germany
Openvalley design websites that are fully functional, either e-commerce or corporate websites. You can add an unlimited number of pages, update content anywhere, at any time, in a simple way. Our websites are multilingual, which means you can add several additional languages, and smartphone optimized.
++ info

6Paid search
Launching a pay-per-click campaign in Germany is a good way to quickly reach new customers. With pay-per-click, advertisers can efficiently and effectively target customers in a foreign country. We can efectively create paid search campaigns on Google targeting the German market.
++ info