English web design: reach new customers in the UK, the US and abroad

You are here: Home » Multilingual website design » English web design: reach new customers in the UK, the US and abroad

– By adding up the gross domestic products (GDP) of all the nations where it is spoken as a mother tongue, English accounts for over 30% of the world’s economic power, with less than 10% of the world’s population.

– English is the first language on the Internet, with over nearly 565 M users in 2011, according to Wikipedia

– With the English language, you can reach not only the US and the UK, but also part of Canada, Australia, New Zealand…and also many more markets where users are able to speak English.

– Optimizing your web site to get it ranked highly in the UK search engines can be difficult. The most popular way for prospective customers in Great Britain to find your business online remains through search engines. And, the best way to get found in search engines is to be listed on the first page for as many relevant keywords as possible. Ranking higher in English search engines and getting found by your target audience requires a search engine optimization strategy targeting the UK and on-going SEO best practices.

Internet Usage and Population Statistics in the UK: 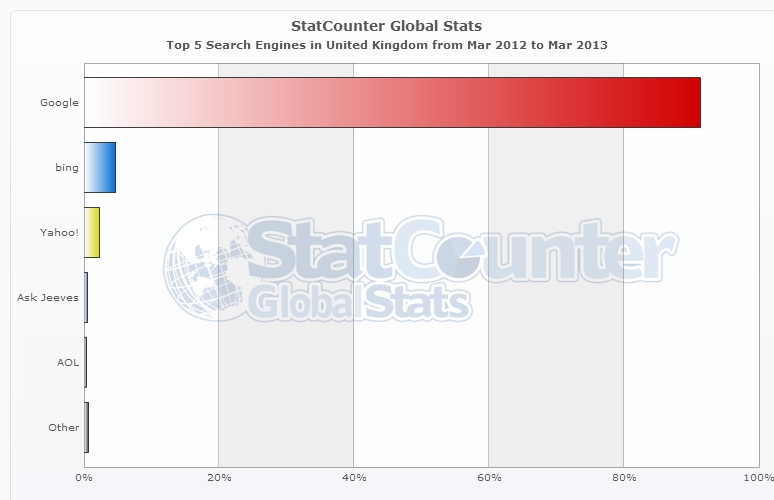 59.9% of internet users in the UK will use social media by 2014, according to eMarketer.

3 in 4 (74%) UK consumers now have an active Facebook account (32,1 M in march 2013, Social Baker) , making it the most popular social media site in Britain, according to infographics produced by eDigitalReseach and IMRG, looking into the developing social media trends in recent years.

However, the results also show that Google+ has a growing number of UK members, with around one third (32%) of those consumers surveyed stating that they are a member of the site.

A growing number of consumers are also increasingly using their social media accounts to contact brands. The immediacy of social media sites means that those consumers contacting brands through the likes of Facebook, Twitter and Google+ are likely to want their query dealt with quickly and efficiently and brands need to take this into account. (IMRG,December 2012)

Which digital services to enter Great Britain or the USA ?

2Social media in the UK or in the USA
Social media should be used to connect with your prospective customers in Great Britain or in the USA, which will drive more business. Openvalley assists you in defining the right Social media strategy, so as to increase your presence on social networks.
++ info

4Website translation
The issue of localization and translation of content in English is key to connect your customers abroad. Openvalley works with a team of native speakers to ensure web translation and localization is SEO optimized which, will positively affects your website rankings.
++ info

5Website design in English
Openvalley design websites that are fully functional, either e-commerce or corporate websites. You can add an unlimited number of pages, update content anywhere, at any time, in a simple way. Our websites are multilingual, which means you can add several additional languages, and smartphone optimized.
++ info

6Paid search
Launching a pay-per-click campaign in Great Britain or in the USA is a good way to quickly reach new customers. With pay-per-click, advertisers can efficiently and effectively target customers in a foreign country. We can create paid search campaigns in English on Google.
++ info