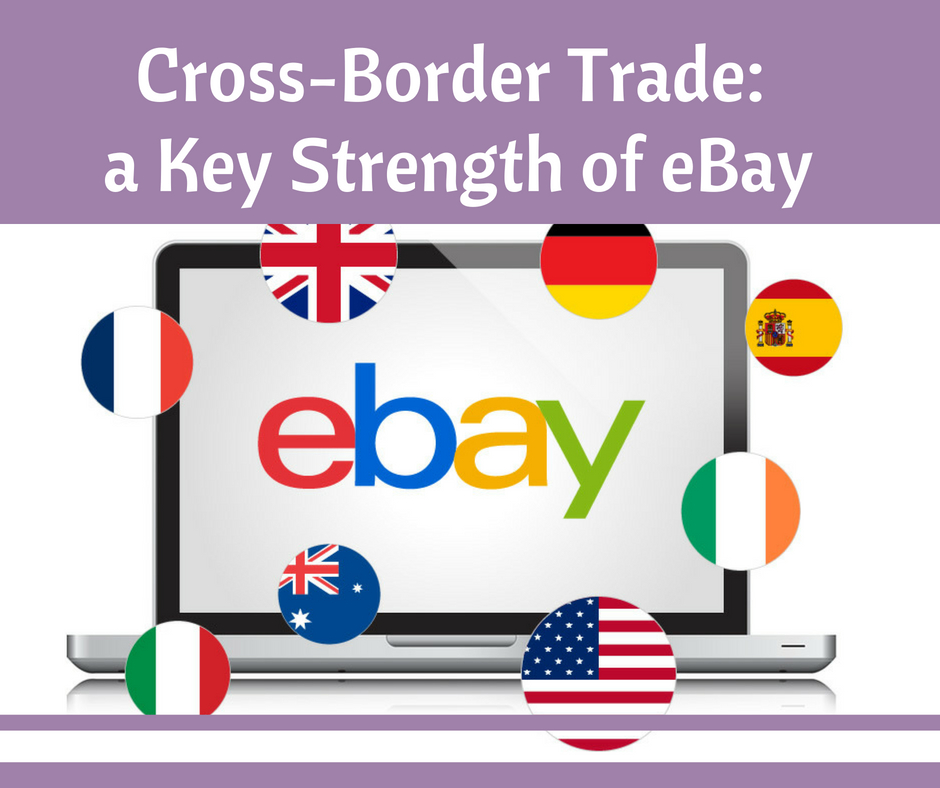 Cross border ecommerce has experienced a strong growth in France: the volume of exports on Ebay increased by 20% between 2013 and 2017, according to recent figures:

– 99% of French professional salesmen sell internationally.
– The number of French companies exporting for the first time has increased by 31% since 2013.

In recent years, Ebay has succeeded in moving from an auction site to a fixed price site, while maintaining its initial activity. Today, fixed price sales represent more than 80% of Ebay’s business. It’s the same for professional salespeople. We’re pretty far from the private auction platform.

Meeting the desire for good deals is no longer limited by geographical boundaries. Although cross-border trade dates back centuries, actually enabling people to shop across borders remains complex. Both buyers and sellers can face challenges, including regional nuances, and language, shipping and payment disparities.
However, for years now, eBay has been a leader in enabling global trade. Today, cross-border commerce represents a significant share of Ebay’s business.

French professional sellers are increasingly exporting their products throughout the world, between 2013 and 2017, those who exported for the first time internationally increased by 31%. They are now 99% to export worldwide. The total value of exports thus increased by 10%. During this period, more than 18 million products were exported.

These exports represent a significant source of income for sellers and participate fully in the French economy.

Among the countries to which the French have exported the most in the last five years are the main European markets such as Great Britain, Germany and Italy, but also the United States, which experienced a 27% growth in export volumes from 2013 to 2017.
Germany remains the preferred export destination for the French ! As for Great Britain, it benefits from the highest growth rate with 54% growth in export volumes, while Germany comes in second place with a 33% increase, followed by Italy with a 30% increase since 2014.

What has been the most sought-after export product category in the last five years? Phones and accessories, of course! They represent nearly 50% of the top selling items on eBay in 2017.

The other most popular export product categories according to the eBay report are :
Art, antiques
Vehicles: spare parts
Collections – Collections
Clothing, accessories
Toys and games

In addition, over the past five years, consumer buying habits have changed significantly and this has also had a direct impact on exports. If in 2013 and 2014, December had the highest sales rate recorded, among other things because it corresponded to the Christmas period, in 2017 the French took it in advance. Black Friday has also become a real phenomenon, so it is the month of November when the export rate was the highest.

Your online presence on foreign markets: the importance of an integrated strategy

Every marketer knows it, a visible online presence is crucial to achieving sustainable success at an international level. While knowledge is one thing, however, it is quite another to translate this into actionable steps that can create a prominent web presence in foreign markets. This is important across all sectors, especially those that are competitive by their nature.

Traditionally, businesses in competitive markets would first create optimized and multilingual websites. These websites would include information about the brand and its product / services. Operating alongside traditional advertising campaigns, this dual-purpose marketing strategy would target potential consumers on the local market and aim to convert them into sales. However, this approach, for most of the competitive markets, is no longer viable.
Many different aspects to take into account while developing a web presence on foreign markets

While the development of a standalone website campaign may drive business growth, it is not enough to gain full access of the market potential abroad. A multilingual website may provide information about your products, and services, but it does not provide any opportunity for real dialogue or interfacing.

In fact there many aspects of an international web presence marketing that can help businesses to actively target foreign customers customers while interacting with them in real-time, when they are engaged with the brand. A good online marketing strategy should strive to engage customers across multiple channels, including websites, social networks, emailing, digital advertising…

A multilingual website should be part an integrated strategy

Today, it is no longer a question of whether to globalize one’s web site, but how to improve the online experience for every foreign prospect and customer. In the internet age, an effective global web strategy is more than ever a strategic imperative. Here is the 3 step process we recommend to establish your online presence on foreign markets, and help your company succeed internationally.

Use the latest technology

For instance, when localizing your content with a translation management system, you have the advantage of translation memories and term bases which can reduce the costs of your translations with minimal effort. It can help for terminology management.
The translation management systems are very useful because they become more robust in the long-run, decreasing the amount of content that needs to be translated, and reducing costs.
Let’s imagine we have an e-commerce company that sells lighting to the French market. We want now to target other European markets, and have made the decision to integrate a translation management system into our localization strategy.
Our web content has a lot of repeated text such as, “éclairage led,” ou, “disponible en différentes tailles.” With a TMS, we have access to a translation memory and glossary, in whicg we have included the keywords from our keyword research, and we don’t have to pay to translate these phrases over and over for every page of content. Once we have translated it the first time, these phrases will be stored in the database and will be automatically reused when they are detected, reducing significantly the cost of the translation carried out by an expert. This is a great example of how to use technology to expand abroad.
Of course, there are many aspects of our online activity that still have to be achieved with the help of native experts: adwords campaign, content marketing, social medias, but staying up to date can be of great help to expand internationaly.